Today I’m going to write about one of my new study species, the Snow Bunting! For those of you sweltering through some hot buggy fieldwork at the moment, hopefully this reminder of windswept and snowy fields will help temporarily cool your thoughts. 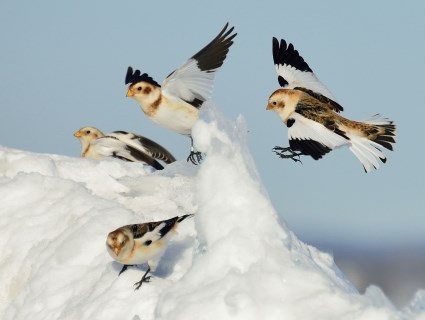 I have the privilege of working with some amazing data collected by Citizen Scientists across Canada (and some in the US too) on the most northern-breeding Passerine bird, the Snow Bunting! Amazingly, there are keen folks who like going outside in frigid temperatures and patiently baiting open snowy fields with cracked corn or millet for Snow Buntings during the winter months when these little songbirds are found in southern Canada and the northern US. These stalwart volunteers form the Canadian Snow Bunting Banding Network (CSBN). Once the buntings are baited, they are trapped with ground walk-in style traps. Basically, the birds walk in, and can’t fly out. There are some great YouTube clips of  Snow Bunting trapping. Once captured, volunteer banders can measure, weigh, and band each bird, making note of its sex and age before releasing it to its flock. Some sites have amazing catching success and trap and band literally thousands of buntings per winter! 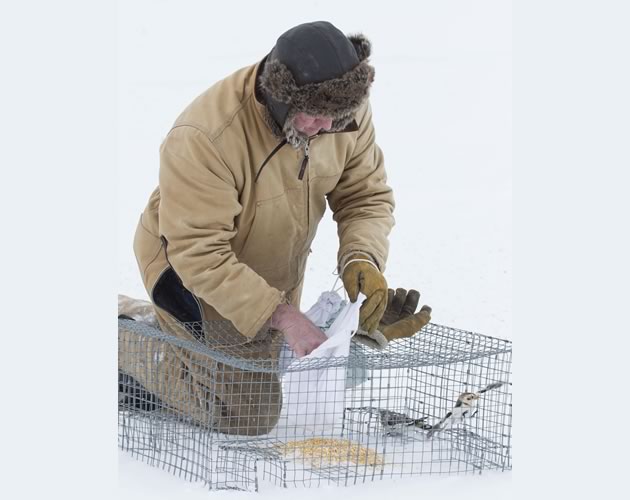 I think part of the reason why you find people willing to brave the wind and snow is that these are some of the most endearing songbirds around.  Nick-named ‘snowflakes’ for their behaviour of flying in twittering flocks over snow-covered fields, Snow Buntings are a cheerful sight and sound on any dull winter day. Plus it’s pretty darn amazing that a 35-gram bird is even out there at all, seemingly content even with -40C nights a regular occurrence. One particularly talented Snow-Bunting aficionado is Marie-Pier LaPlante (also doing her Masters research on Snow Bunting flocking behaviour), who wrote a song about them! Listen to it here:

So all of this winter banding has generated some pretty neat data on winter distributions of this species. One obvious pattern is that there seems to be a sex-bias in captures at some sites. For example, in Thunder Bay, Ontario, mostly males are captured. In Essex County (southern Ontario), mostly females are captured. My colleague Christie Macdonald wanted to figure out what was explaining this pattern for part of her Masters thesis at the University of Windsor in Dr. Oliver Love’s lab. She hypothesized three possible explanations for this pattern: 1) Males are more cold-tolerant because they tend to be a bit bigger, 2) Males winter closer to their breeding sites so they can get back earlier to claim nesting sites, and 3) Males winter in the ‘best’ habitats and kick females out through social dominance, resulting in an overall sex-biased distribution. In short, we call these: 1) the body size, 2) arrival time, and 3) social dominance hypotheses.

Each dot shows a banding site and the size of the pie shows the number of birds captured. You can see there is a gradient with more females captured in southern Ontario – but there are some exceptions, e.g. in Newfoundland, there are quite a lot of females captured despite it being very far north.

We set out to test these hypotheses using our ginormous banding dataset of nearly 40,000 winter site captures (whoa) combined with migration information from directly tracking 19 of these little guys with geolocator backpacks.

We looked at the ratio of males to females at each wintering site and compared it to the local weather patterns. Since males are bigger, they should be more cold-tolerant, so we predicted more males and bigger birds of both sexes at colder and snowier winter sites. If males were wintering north of females to get back earlier at breeding sites, we predicted they would have shorter spring migration distance. The trickiest hypothesis to test was the social dominance hypothesis, but we figured out a roundabout way to look at it. Basically we went on the premise that birds with less access to food tend to carry more fat as insurance against starvation. So we predicted that if females are being denied access to food by males, they might carry more fat than males, regardless of size or local weather. We had fat scores (relative measures of subcutaneous fat) from a lot of our captures, so we used these measures to test for patterns in female fat levels that could indicate they were being excluded from food.

The first thing we found was that sex ratio didn’t seem to change much over the course of the winter at any given site. Then we looked at the size of birds relative to weather. We used data on average snow depth, snowfall and temperature, and combined them into one measure of weather harshness using a principle components analysis (PCA). This gave us a measure called PC1weather, where higher values = more ‘wintery’ sites. We found that there was a significant relationship between body size (measured by wing length) and weather – bigger birds of both sexes were found at colder sites! Also we found that the proportion of males was related to the weather in the same way. Proportionally more males were captured at more wintery sites.

So it looks like we are getting lots of support for the body size hypothesis – namely, the bigger you are, the more you can tough it out when the weather is harsh. Because males tend to be bigger than females, this explains why there tends to be more males captured at more northern sites – those sites tend to be the coldest and snowiest.

But males also need to get back to their Arctic-breeding sites early, so maybe that is also driving their choice of wintering site. When we looked at our 19 birds tracked on migration from a breeding site at East Bay Island, in the Canadian low Arctic, we found that males didn’t migrate shorter distances in spring than females. There was a slight trend for males to winter further north but this only translated into ~150km difference on spring migration. Hardly enough to allow males to arrive much earlier at the breeding site (we know buntings can easily cover 150km of migration in a day from Christie’s previous geolocator study). Therefore we concluded that the arrival time hypothesis wasn’t the main reason behind the differential distribution of buntings by sex in winter. 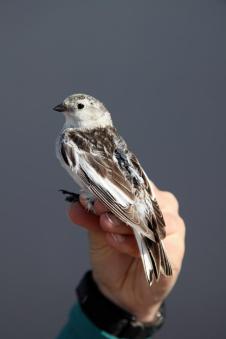 Here’s one of our backpack-toting Buntings from East Bay Island.

Males didn’t really winter that much close to their breeding sites than females. Overall spring migration differences were negligible.

Finally, we tested to see if female buntings carried more fat than males, possibly indicating that they had less access to food via social dominance effects. While our fat-score models were generally pretty poor, we found a trend that females did tend to carry more fat than males, independent of weather effects on fat levels. Older birds also tended to carry more fat that younger birds, which seemed weird at first, since older birds are usually the dominant ones in most species I’ve studied. But, delving into some of the Snow Bunting literature I found a study on dominance in flocks of buntings wintering in Scotland that showed younger birds are actually dominant over adults (Smith and Metcalfe 1997)! So the fat scores do make sense with what we know about dominance status.

At the end of the day, the best answer for why do male snow buntings winter further north than females seems to be that the males are simply bigger, and presumably better able to tolerate those 30-cm dumps of snow and -40C nights. One interesting implication of this relates to climate change. Winters in North America are getting warmer, and less snow will become the norm in may places (Krasting et al. 2013 Journal of Climate). Will this reduce constraints on smaller-bodied female buntings in future? Migrating farther distances from breeding sites is presumably costly, so if they don’t need to go far to find tolerable winter sites, perhaps they will end up wintering further north. Time will tell, and maybe our winter distribution map will have a lot more pink on it in decades to come.

For our full paper, please visit the Journal of Avian biology link below or email/tweet me for a copy:

3 thoughts on “Winter sex-segregation of Snow Buntings explained: The boys are just bigger”

Department of Biological Sciences
University of Manitoba
204-218-9057
emilymckinnon12 AT gmail.com